PROTECT YOUR FAMILY!
GET A GUN!

A prudent person foresees the danger ahead and takes precautions. The simpleton goes blindly on and suffers the consequences.

I had just put on my jacket, to go out on my prayer walk. It was a very early, beautiful morning, and I was going to drive to the lake to walk and pray. I opened my garage door as I do every morning, but got the shock of my life!! I was stunned! My beloved silver Honda Civic was gone! I mean, GONE! I stood there aghast, repeating over and over again, “My car, my car, where is my car?! Somebody stole my car!!” I was enraged that someone would be so brazen, wicked, and pathetic to steal my car. I live in a safe suburb! This was going to be a major life hassle and it made me very angry. Then it hit me. “Mark, your garage door opener was in that car. The thief could have just opened your garage door, come into your garage office or home, and hurt your wife, or you, and stolen even more!” I was totally unprepared for that situation. Of course I had locked my car as I do every single day everywhere I go. It was parked in my driveway right under our bedroom window. But I also realized we live in a time of rampant criminality, and I refuse to be their victim or allow them to hurt my family.

I knew then, I will never be unprepared again. I am going to get a gun, to make sure if anyone breaks into my home, I have what I need to protect my wife, and myself. Secondly, I am going today to buy a Club lock to put on the steering wheel of the next used car I get and make it very hard for anyone to do this again. Third, I am going to get a warning sign to put on my front door, and back door making it crystal clear, this home is protected by a gun, you break in and you’re in serious danger.

I emailed a good friend who is very knowledgeable about guns and asked him what would be the best pistol I could buy for under $400 dollars. He gave me a great suggestion. The Taurus Luger G2c 9mm. I called Mills Fleet Farm, they had one for $269. After jumping through the ridiculous restrictive hoops Minnesota requires, waiting several weeks just for a permit from the Police chief to purchase a gun, then a background check, I bought it and one box of ammunition, as that was all they had.

I would urge every one of you fathers to do the very same things. Did you know these facts:

So let me urge you this new year: Get a gun, get this sign for your front and back door. This warning sign is a vital pre-emptive deterrent. It makes criminals think long and hard about the imminent danger they face if they break into your home! 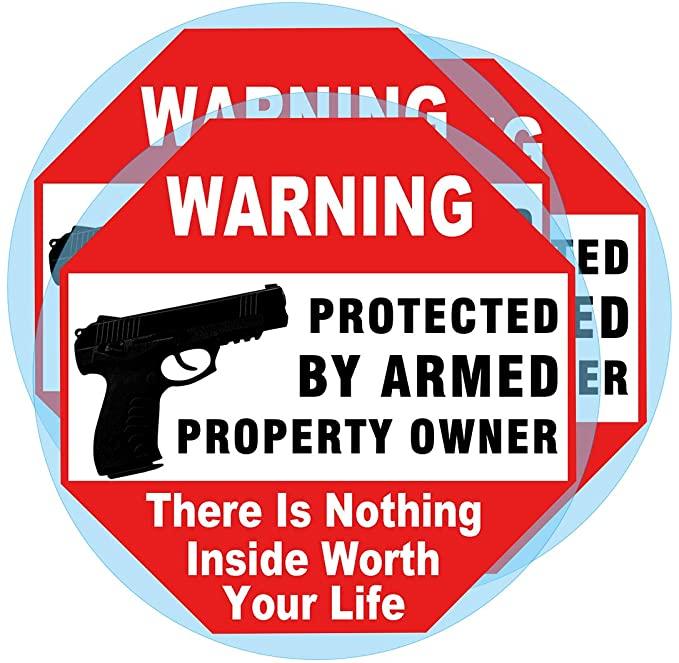 Remember: The Police do not protect you from a crime happening at your home! They respond after a crime or an accident has already happened!

Helping you become a Strong Disciple,

Because of Jesus,
Pastor Mark Darling